Valencia allowed some of their star players and top earners to leave the club in the last window and have failed to make any significant additions to their squad.

Marca suggests the La Liga side sold some of their players to reduce costs to ‘make it more attractive for a possible future sale’.

Although Peter Lim has not discussed selling his share of the club, potential suitors have started to emerge and the ‘first to come’ is Leeds United owner Andrea Radrizzani.

It’s claimed the Whites chief first contacted the Spanish side ‘weeks ago’ to find out if they could start talks for a possible sale in the future.

The newspaper explains two factors make it difficult to resolve the issue around selling the club.

The first is the value of the share price Lim will demand once there is a buyer. As per the report, the overall price would not be less than €195m, which is close to the figure he invested in the club.

Due to the current climate, Marca are of the belief it will be difficult to see such an offer arrive, unless the buyer has substantial financial backing. Even then, quite why Lim should get all his money back isn’t clear.

Valencia have a debt of ‘more than €500m’ and this is the second difficulty a potential buyer has to deal with. The debt accumulated by the club owned is ‘hardly digestible’ for any individual or entity, unless they decide to table a very low offer to buy the club.

Marca have consulted financial sources who were involved in taking over other European clubs and they suggest it’s a very difficult situation.

The process of buying a club cannot be completed fast, and even though Lim hasn’t 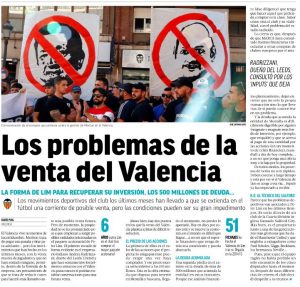 publicly stated he wants to sell Valencia, ‘Inputs have already begun to arrive’.

The ‘inputs’ referred to by Marca could mean the contact from Leeds United’s owner.

Meanwhile, AS contacted sources close to the Singapore billionaire and Valencia, and both have informed the newspaper that Lim has ‘no intention of selling Valencia’.