Throughout the summer market, Moise Kean was linked with a return to former club Juventus.

According to the claims, the striker hadn’t settled fully in English football and hadn’t had the extra prominence he expected when Carlo Ancelotti took over at Goodison Park. There’s been no reason for the manager to change his plans this season, with Everton flying high at the top of the Premier League and certainly not struggling to find the back of the net.

Juventus would have taken the player back as a rotation option, and there were daily reports in the Italian sport media about Mino Raiola trying to build a deal. Juventus wanted Kean on loan, with a buying option, whereas Everton were said to be insistent on securing as much of their money back as possible.

Then, as the window was getting ready to close, Kean signed for PSG instead, taking up a squad role with the Ligue 1 champions.

This week’s edition of France Football takes a look at some of the drama which happened at the end of the market, and Kean is part of the feature. Leonardo, PSG’s sporting director, is presented as being far more adapt at buying well than selling well, and it’s claimed he got a really good deal for the Italian. 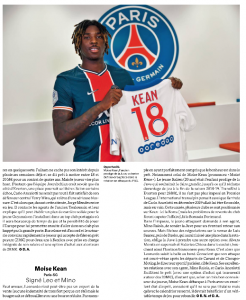 Whilst the move being a loan is known, France Football state there’s a buying option of around €20m, which is far less than what Juventus had been asked for.

That seems cheap for PSG, especially given the earlier reports over Everton’s stance, so it’ll be interesting to see if this claim is responded to.