Monday’s edition of Sport claims images and videos from the Mauro Icardi, Edinson Cavani and Ángel Di María joint birthday party that took place in February were scandalous as it came just two days after PSG’s defeat to Borussia Dortmund.

PSG sporting director Leonardo had called for an emergency meeting, during which Neymar raised his voice against his compatriot. The forward’s relationship with Leonardo is said to be broken and he could leave the club in the summer after refusing to sign an extension.

Dortmund’s Jadon Sancho would be Neymar’s ‘substitute’ at Parc des Princes, claims another small segment from Sport. The French champions have identified the winger as a summer target.

The first leg of the Champions League knockout tie between Dortmund and PSG took place last month and the German side registered a 2-1 home win.

It’s claimed PSG took advantage of their clash against Dortmund to check Sancho’s availability for a transfer. 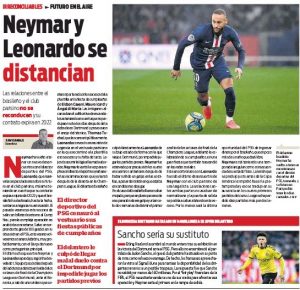 The Bundesliga club responded to PSG that the teenager will not leave for anything less than €140m.

For PSG to sign Sancho, they need to sell one of their star players and Neymar could be the first one at the exit door.