Other than a centre-back, it seems Carlo Ancelotti also has a mind to improving the creativity in his midfield at Everton, since Gylfi Sigurdsson hasn’t hit his usual heights of late.

The Iceland international, known for scoring and assisting aplenty, has only managed two goals and two assists in 28 appearances, which appears to be leading the Italian to look elsewhere for next season.

The person he appears to have in mind, at least according to Corriere della Sera, is Lazio’s Luis Alberto, who, unlike Sigurdsson, has been having one of the best seasons of his career.

The Spaniard, who spent a brief period at Liverpool earlier in his career, has been instrumental in the Serie A club’s great run of form this year in the league, assisting 14 goals and scoring another five in 30 appearances in all competitions.

This has caught the attention of clubs around Europe, including at Goodison Park, as the Italian newspaper explain Ancelotti ‘would see him gladly at Everton in the future’. 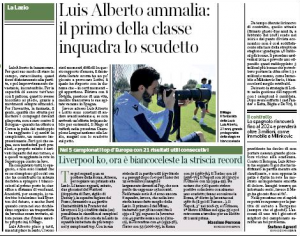 Of course, all of that would come at a price, and it’s unlikely that Lazio, who could also see an increased interest in Sergej Milinković-Savić, would want to let him go.

There has already been talks between Luis Alberto and his club regarding a renewal, with a two year contract extension and a salary going from €1.8m yearly to €3m on the cards.

That’s to avoid previous situations like the ones Lazio have faced with Stefan De Vrij and Balde Keita, who left on frees.

So if Everton want the former Liverpool player, they’ll have to pay up.