Sunday’s El Clasico was a painful one for Barcelona.

Gerard Pique made that clear with the his post-match comments that the current Real Madrid side is the worst he’s seen in a long time, or at least they were in the first half.

That was petty from the defender, and presents the question that if Madrid are so bad, at least relatively, then what can be made of the current Barcelona?

Last weekend they beat Eibar 5-0, thanks to four goals from Messi, and then failed to beat Napoli in the Champions League.

Then Messi had a poor night at the Bernabeu and Barcelona weren’t able to overcome it, losing 2-0 to Real Madrid. Ole! reckon Messi showed he’s currently ‘worried’, and they believe his connection with Antoine Griezmann has been a failure.

To demonstrate the extent of Messidependencia, Ole! say his back-up yesterday was 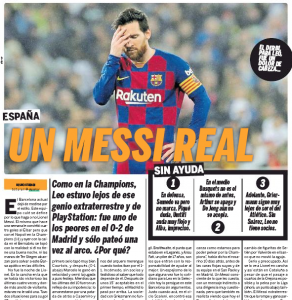 Martin Braithwaite and 17 year old Ansu Fati, far away from the level of options Barcelona should have.

All of this adds to Messi’s perceived frustration with those in charge at the Catalan club, and it’s pointed out he’s facing problems he’s encountered previously with the Argentina national team.

Too much weight is on Messi, and when he buckles, there’s nobody there to pick up the pieces.