It’s with a mix of confidence and mistrust that the Turin media has been following the Emre Can saga every day.

With the Liverpool player waiting for the season to end before picking his next club, newspaper Tuttosport continues to believe that Juventus will be the favourites to land him, but that still can’t be guaranteed.

Today, they claim that officials from the Old Lady keep in contact with Can’s staff almost on a daily basis, but still can’t convince him to sign a pre-contract.

What worries them most is that news from Germany continues to say there are other options attracting the Liverpool midfielder, who would have offers from Real Madrid and Bayern Munich as well. 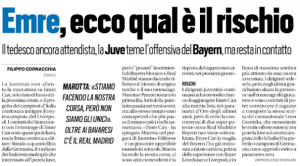 Since Can has already played for the German side in the past, the player would be more tempted for a ‘new adventure’. However, some recent contacts from Bayern have been ‘pressing’ the Liverpool player’s staff, with the club believing they could bring him alongside Leon Goretzka as two big free agent signings next summer.

That would certainly be a big blow for Juve, who would see Can escaping from their hands. With Liverpool not having a chance to negotiate, and the player free to choose his destiny, it’s all a matter of who will attract him most.

Of course, this could all be Can’s agents putting pressure on Juventus for more money.