Fans also protested to differing degrees at Lille, PAOK and Hamburg at the weekend and it’s all being presented as a shameful episode for football.

Spanish newspaper AS states FIFA has ‘declared war on the ultras’ and wants national associations to stamp out such issues, and to act strongly when something does go wrong.

That means the FA are being pressured into acting tough with West Ham, and AS says that if they don’t then FIFA will move directly.

FIFA ‘intends to intervene’ if the FA don’t apply the full weight of their own football laws against West Ham. 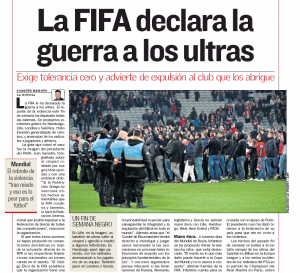 Whilst it may be questionable just what FIFA could do, and how they’d actually do it, it’s not good for West Ham if external pressure is being put on the FA to deal with the incidents especially toughly.

The World Cup appearing on the horizon is another reason for the encouragement to hand out severe punishments.