Home Premier League Crystal Palace What may have been – Player ‘informal’ captain and ‘commander’ after Crystal...
SHARE

Steve Mandanda put in one of his best performances of the season for Marseille at the weekend.

With Rudi Garcia’s men triumphing 2-1 over Toulouse, Mandanda was one of the best performers on show, but L’Equipe have an article today explaining just how important the goalkeeper is generally.

Having been Marseille captain for six years, and so good he was a huge figure of respect in French football, Mandanda made the decision to move to England.

It didn’t work out, and L’Equipe report he ‘returned on tiptoes after a rotten season at Crystal Palace’. When back Mandanda was informed by Garcia that he wouldn’t be captain, because the manager doesn’t pick a goalkeeper for that, but the Frenchman has nevertheless been ‘informal’ skipper.

Almost the self appointed father of the Marseille team, the 32 year old manages and motivates his defence and is dubbed by L’Equipe as the team’s ‘commander’.

Sure, it took him a while to get back into the swing of things after his Crystal Palace nightmare, and to ‘mark his territory’, but that’s now all behind him.

It creates a bigger question of what went wrong at Crystal Palace, who continue to struggle for a goalkeeper.

Vicente Guaita is set to arrive in the summer, although there are claims in Spain of a get out clause should Palace be relegated. 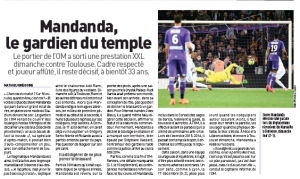 Mandanda arrived at Crystal Palace in summer 2016 and the season before he’d been so good in France that there’d been calls from some quarters for him to be given a shot to rival Hugo Lloris rather than simply be his back-up.

Injury issues were then met with a perhaps inexplicable Sam Allardyce stance that picking Wayne Hennessey would be the better plan. Mandanda then seemed to very quickly fall out of love with his Crystal Palace adventure and started to look for a Marseille return.