During the January transfer window there were repeated claims of Chelsea interest in Fernando Llorente. At the outset the claims didn’t make a great deal of sense, Conte had his main striker in Diego Costa, and Michy Batshuayi was finding it difficult to get any minutes whatsoever.

However, Conte had shown at Juventus that a wide variety of options upfront is something he feels is necessary for a squad, even if some of the players aren’t used very often.

Llorente had been at Juventus, and whilst the transfer didn’t work out quite as well as he may have hoped, he provided that extra option, and was used enough to justify the move.

Speaking to Radio Marca, Llorente was asked about Chelsea approaches during the winter window, and wasn’t scared to talk about it, explaining Swansea City put a block on the 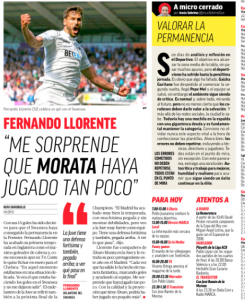 “At that time we were in a delicate situation,” explained Llorente. “I was the one who was making the goals at Swansea and they would not let me leave.”

There’s a chance Conte could return for the 32 year old this summer, and with only a year of contract left, Swansea would likely be happier to sell.