Home Championship Newcastle United and Rafael Benitez will need to be wary after initiating...
SHARE

When the Magpies where first linked to the player the weekend before last, it seemed like his departure from Sporting was imminent.

As the defender didn’t have a very good season at the club, the fans were asking for his exit at the last game of the season, when they took a banner with the message ‘bon voyage’. 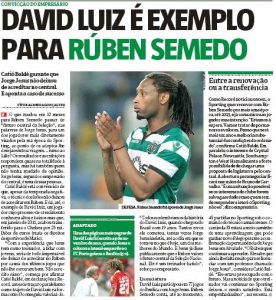 But, as revealed the Portuguese press this week, Semedo may end up renewing his contract with Sporting. His agent Cátio Baldé has even spoken to newspaper Record and confirmed the wish.

“We’re waiting,” Baldé told Record. “We’ll sort the details and figures. I think it will be of one more year and a considerable improvement in salary conditions.”

But the representative couldn’t rule out the chance of a move: “It’s a possible situation.”

Semedo currently has a €45m release clause, and although the recent rumours have been saying he could leave for much less than that amount, we wouldn’t doubt Sporting asking for more

The competition for the defender seems to be pretty widespread. Only in the Premier League, Crystal Palace, Southampton and West Ham have all been linked as well.

The original Newcastle United claims said the club had contacted Semedo’s entourage to know his opinion over a possible transfer. What Rafael Benitez and those in charge at St James’ Park won’t want is for Newcastle to be used as a negotiating tool.