On July 22nd, we covered claims made by L’Equipe that said Tottenham Hotspur have been ‘contacted’ about potentially signing Barcelona’s Antoine Griezmann.

A day later, ABC Sport reported that Spurs could ‘meet all expectations’ set by the Catalan club to sign the forward this summer.

It was also stated the 30-year-old could be the ‘guaranteed attacker’ to replace Harry Kane, if the latter ends up leaving the north London club.

Sport now give an insight into Griezmann and the La Liga side’s stance on a potential move in the ongoing window.

The France international’s future ‘remains undecided’ even after holding talks with Ronald Koeman’s side.

It’s claimed a ‘potential offer came’ from Nuno Espírito Santo’s side, but a deal would not go through because the player isn’t in favour of trying a new adventure in the Premier League. 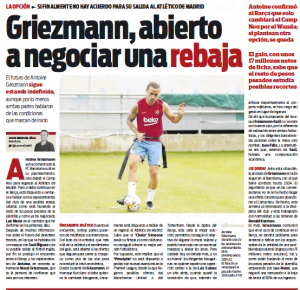 Griezmann has informed Barca he will only leave the club for Atlético Madrid, where Diego Simeone ‘endorses’ his arrival.

Sport further add the attacker is also ready to take a pay cut to continue at the Camp Nou and this would be the ‘best solution’ from Barcelona’s point of view, since they are working to lower their salary budget.