Ever since it was announced that Barcelona were trying to renew Lionel Messi’s contract and were getting close to doing so, there was a feeling Antoine Griezmann might be the sacrificial lamb.

After all, the Frenchman never really got going at the La Liga giants following his large and noisy move from Atlético Madrid, and with a huge salary to boot, he was the most logical choice.

Finding him a landing spot has proven tricky, however, and L’Equipe in France claim Tottenham have been ‘contacted’ alongside many others about potentially signing him.

They join a list including Atlético Madrid, Manchester City and Juventus, and yet no one has taken the bait fully just yet.

His former club looked into it, as a swap deal with Saúl was mooted, but that never fully took off, meaning they are back to square one.

There’s little information about Tottenham in all this apart from the line claiming Spurs have been contacted by Barcelona, but it’s easy to see why there’s never been any real progress down that avenue. 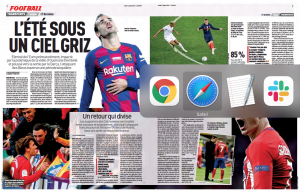 The London club still have Harry Kane on their books, and logic would state they would only target a player of Griezmann’s ilk were they to sell their talisman.

There’s little chance of seeing Daniel Levy splashing the cash on a 30-year-old earning €36m pre-tax per year at this stage, especially with no guarantee of getting any money back from a future sale.

So, Tottenham may have been contacted, but it appears they never really looked to do anything with the offer from Barcelona.