Even though people criticised Ruben Neves’ transfer to Wolverhampton Wanderers as if he was too big a player for the Championship, it’s now safe to say the move ended up helping him in his career.

Before joining Wolves, the 20-year-old had only made two senior appearances for Portugal, both in friendlies in 2015. Now since the move to England, he’s made another two, and is likely to start the game against Egypt this Friday.

That’s big news for him, and since newspaper O Jogo had a story about the reputation he’s getting in England this week, they now have another article, this time interviewing a couple of journalists from the British media.

Mike Whalley told the newspaper that “Neves is one of the best midfielders in the Championship”, while Jason Burt from The Independent added “For a player who has arrived in England this year, he seems very interesting”. 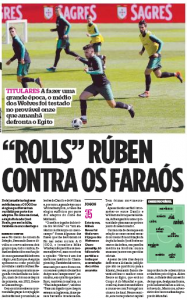 Just like they did last Tuesday, O Jogo takes the comments from Wolves fans on social media which called him a ‘Rolls Royce’, and put it in the headline again.

They really loved that nickname.

The defensive midfield is in a difficult position to conquer in the Portuguese national team, since William Carvalho and Danilo Pereira have been doing well in that role for years.

But with this start, the Portuguese press expects Neves to prove himself to manager Fernando Santos.