Since the Champions League draw, the Portuguese press has acknowledged that Liverpool are a better team than Porto. They’ve never denied it.

There’s been a very positive build-up, covering Jurgen Klopp’s great team and even talking about the city… and of course The Beatles.

After Tuesday night’s match, their opinion continues. They say Reds are a superior side who got a fair result. But there’s the feeling that Porto could’ve done better with a little help from the referee.

Newspaper Record brings a few texts about the game today, and two of them complain about some decisions against the Portuguese side.

One of these articles is written by Vítor Pinto, who says: “Even rowing against the tide, FC Porto had all the conditions to not depend on external evaluations to end the night smiling. However, since Marega lacked the inspiration to be decisive, controversial moves could have widened the window of hope.”

“However, neither Mateu Lahoz nor VAR Gil Manzano avoided the controversy by solving all doubts in favour of the English. In Portugal, there would be room for suspicion and controversy. At UEFA’s behest, even tweets that rage on social networks choose to move past the risk of heavy sanctions. On the pitch, Liverpool chose not to expose themselves and preserve the advantage in the final stretch of the game, in a demonstration of respect for the nonconformity of the rival. In Dragão, FC Porto have to believe that nothing is impossible.” 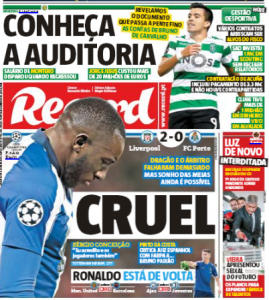 Columnist Alexandre Carvalho goes heavy on the referee, claiming that he wouldn’t have taken the same decisions if they were in favour of Porto.

“If it is to blame someone, then the choice is obvious: Mateu Lahoz, the Spanish referee of this game, who even with the help of the VAR failed to see two penalties in favour of FC Porto and Salah’s hard challenge on Danilo, deserving of straight red. My question is the same as I do in Portugal when the plays are against the big teams: what if it was on the other side?”

Regarding Salah’s red card no-show, after the English press agreed that the Liverpool star should have been sent off, Portuguese websites are all covering the comments to further point out how unfair it all is.