For the past few days, we’ve seen a few reports in the Portuguese press claiming that Braga striker Paulinho would soon be moving to England in a €30m deal.

Since there are many Premier League sides who could afford this transfer, it was hard to guess who would be taking the 27-year-old this summer.

Newspaper A Bola finally comes up with a name today, and apparently, it’s Wolverhampton Wanderers who are landing the Braga star.

The outlet writes that the transfer intermediated by Jorge Mendes is ‘practically concluded’, and it’s Wolves who are the ‘likely destination’. 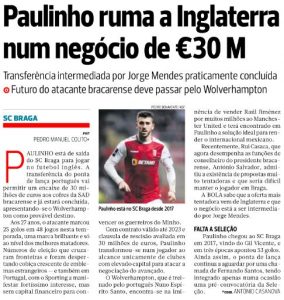 A Bola claims that the sale of Raúl Jimenez to Manchester United is ‘imminent’, and Wolves found Paulinho as the ‘ideal solution’ to replace the Mexican striker.

That claim may be wide of the mark, and Paulinho’s transfer could be completely unconnected.

The newspaper refers to the business as the ‘most tempting offer’ coming from England. But the fact is that €30m is the amount of Paulinho’s release clause, so there’s not a lot Braga can do in case this bid is really made.

Paulinho had 25 goals and nine assists in 48 appearances for the Portuguese side this season.