Chelsea are interested in Borussia Monchengladbach defender Matthias Ginter this summer but may need to convince him into the move.

That’s according to Kicker, who cover their interest today but explain that the defender may need talking into the switch to Stamford Bridge.

Reports yesterday indicated that the Blues were keen on the German centre-back, with Frank Lampard thought to be keen on improving a leaky defence this summer.

Kicker confirm that is the case, explaining that Ginter, who has shone for the Bundesliga side this season and ranks top of the newspapers own rankings, has interest from several clubs this summer.

One of them is Chelsea, whose interest has been ‘conveyed’ to  Monchengladbach already. They are not the only ones keen either, with Inter Milan and Atlético Madrid also eyeing him up.

Inter, in particular, have ‘thrown the rod’ at the player and already ‘opened the hunt’ for him, making it clear they are open to offering him a significant increase in his wages to eight or nine million a year.

Similarly, they are ‘prepared to pay’ €40m and more to secure his signature, which would be a significant figure for Borussia given Ginter’s contract expires next year – although there is an option to extend it until 2022.

So far they are resistant to a sale, and manager Max Eberl has made this clear publicly, although Kicker say that is a clear rejection of the rumours ‘as of now’, indicating it could change.

Ginter, for his part, does not want to comment on the situation but there are doubts about whether a move to Chelsea or anywhere else would be attractive for him. 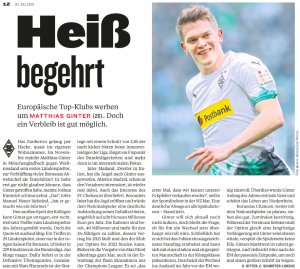 He’s enjoyed a superb season at the club this season and established himself and can ‘present himself’ with a strong and well-established team again next year.

That would make sense given the European Championships are scheduled for next summer, meaning this year he will want to be playing well to be in contention.

There are also personal reasons too. Ginter has just become a father for the first time and ‘appreciates life’ in the Lower Rhine region, two more reasons why he may be reluctant to move at present.

Borussia, therefore, are planning for the future with him and while they would prefer to agree a new, longer deal with him, there is no rush to do so.

In fact, Kicker speculate that after seeing Ginter’s value rise recently, perhaps next summer, following the Euros, would the right time to take ‘another big step’.

That would suggest neither party are interested in a deal this year and Chelsea may be better focusing their efforts on a more attainable target.