Everton youngster Nathan Markelo has confirmed that Marcel Brands was keen to send him out on loan for first-team experience this season.

Markelo has joined Dutch side FC Twente for next season, having failed to break into Everton’s first-team since his arrival from Volendam in 2017.

He has instead starred in the club’s youth ranks, training with the first-team and gaining experience in that way.

However, the Blues have elected to send him out for first-team football this season, with reports claiming that Brands wanted him to play in a top league somewhere in Europe.

That is something he has undoubtedly secured with Twente, the Eredivisie having long been a breeding ground for talent with a long list of players having blooded themselves in the division before going on to star in Europe’s top leagues. 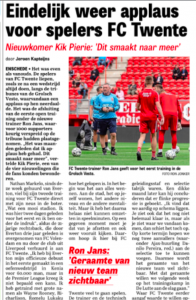 Everton will certainly be hoping Markelo can develop during his year away, and the player says Brands believes it was a smart step for him to take.

“What a beautiful stadium. I was here for the first time two days ago, and I am impressed,” he told De Telegraaf.

“I made my unofficial debut with Everton in the first practice match in Kenya in front of 60,000, but in the Premier League, I didn’t exactly get a chance.

“I have trained with big names like Wayne Rooney, Richarlison, Romelu Lukaku and Ross Barkley, but it’s important for me to start playing now.

“Marcel Brands thought it was a smart step for me to try to get match time, and supported me in my choice.”