Home Europe From Portugal: Man City had €100m to spend on defender before Coronavirus...
SHARE

Reports from Portugal today say Manchester City would’ve spent €100m in a defender this summer if it wasn’t for the Coronavirus pandemic.

Giving some context, these claims are the result of quotes from the Eagles president Luis Filipe Vieira this week. Speaking to the club’s TV channel, he claimed he could have sold two of their players for €100m each if it wasn’t for the financial crisis.

The local press has been trying to find out who these players are, and who would spend that much on them, and that’s what Record does when saying it’s Ruben Dias and Manchester City. 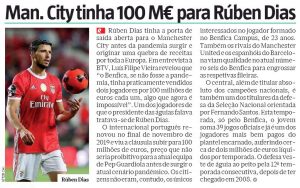 Dias signed a new contract at Benfica last year, raising his release clause from €60m to €100m, and Record says that would not be a problem for the Premier League side.

The defender, who’s been standing out for the Eagles for a few years now, is also said to be wanted by Barcelona and Manchester United.