Besiktas’ board will reportedly hold talks with the player’s entourage in the coming days, and they see him as a perfect replacement for the Croatian defender, who has been linked with a move to England.

Shotton’s contract with Middlesbrough will expire at the end of the season and given Besiktas’ current financial situation they could see him as an ideal target.

Takvim report Besiktas’ technical staff are impressed with the 31 year old’s versatility, and are planning to use him as a right-back or a central defender if he agrees to move to Istanbul this summer. 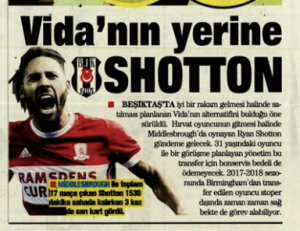 Shotton joined Middlesbrough from Birmingham City in 2017 and has been a regular during his time with the Championship club.

This season the English defender has made 17 appearances for Jonathan Woodgate’s side in the Championship, but it’s looking likely he won’t be offered a contract extension.

“I hope to stay longer” – Liverpool player on future, PL success and ready to go to war for Klopp

“I hope to stay longer” – Liverpool player on future, PL...

Txiki ‘pushed until the end’ for Manchester City signing – Club...