Remember last week, when Wolves were linked to Iuri Medeiros? That was a pretty strange story.

Several sources were all pointing to O Jogo, who ended up crediting the English media. At the end of the day, we found out it was coming from a suggestion made by a website. Typical stuff.

Well, the news at Sporting today is that Medeiros was called to make the preseason with the squad, something which A Bola considers as a big sign that he’s staying at the club. 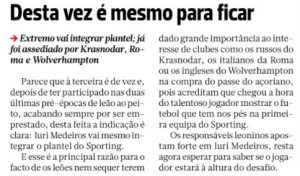 But they go further, and claim that Sporting didn’t give any importance to the interest of other clubs, named as Krasnodar, Roma and Wolves. The club reportedly believes it’s time to give a chance to the youngster who’s spent the last season on loan.

But were Wolves ever in contact to sign the player? Given the story from last week, it’s difficult to believe it all.