It seems Everton haven’t only joined Newcastle United in the race for the Greek midfielder Andreas Samaris, but also made the first move to sign him.

As reported by newspaper A Bola today, the Toffees tried the first shot by offering Benfica €16m for the 28-year-old, but the bid was rejected.

The Eagles would be demanding €20m for Samaris, something that had already been offered by Sunderland in the January window, but was turned down at the time due to the Portuguese club’s focus on the title race. 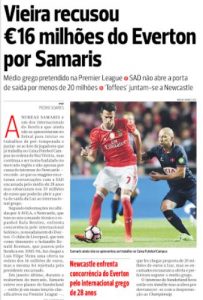 Newcastle’s delay in making a bid is also reported by O Jogo this morning. They claim Newcastle are still deciding their priorities for the season, and whether Samaris is one of them.

O Jogo says the club may still let some midfielders go and they want it all sorted before spending money on another player for the position.

The Portuguese newspaper’s story makes one wonder if Everton have really made a bid or if they’re being used to put some pressure on Newcastle.

It’s hard to believe a deal won’t happen because of the offer being only €4m short, so let’s see what happens next.

Wednesday’s Portuguese newspapers also claimed Everton have made a big move for Raul Jimenez, which seems unlikely. Word of Everton’s free spending must have got to Portugal, and now the club can be used as a tool in transfers.