PSG welcome AS Monaco on Sunday evening, and L’Equipe have an article explaining the relationship between Mauricio Pochettino and Paul Mitchell.

The pair worked together well at Tottenham, and the French newspaper explain that aside from identifying and helping to sign transfer targets, Pochettino most valued the ‘buffer’ Mitchell provided between him and Daniel Levy.

According to the report, the manager wanted to ‘avoid endless, exhausting’ exchanges with Levy. The Tottenham chief can ‘exhaust the patience’ of anyone, and Mitchell was not only a buffer at Spurs, but he also helped ‘professionalise’ the club in various off-the-pitch areas.

L’Equipe say that come 2016, Mitchell had become ‘bored’ of Levy’s approach to the business, and decided to leave Tottenham for elsewhere. 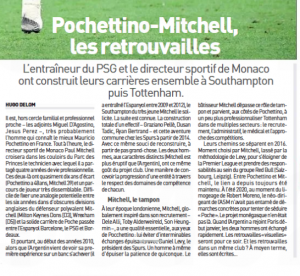 That saw him move to the Red Bull group, and then eventually to AS Monaco. According to the article, the pair remain close and there’s the possibility they could work together again in the medium term… just not under Levy at Tottenham.