Everton’s 2-0 victory over Liverpool at Anfield on Saturday has obviously caught the attention of football media around the world.

Given the Toffees hadn’t won away at Liverpool for 22 years, and the Reds’ recent struggles, it’s one of the biggest stories in football this weekend and is being given big attention.

Liverpool have ‘no brake’ for their fall and have had to change their target from a Premier League title defence into trying to achieve a Champions League place for the next campaign. 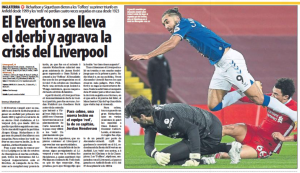 Mundo Deportivo report Everton have ‘aggravated’ the crisis at Liverpool, and they feel the Anfield problems are now so deep they’ve become an ‘ordeal’.

It’s added the Toffees ‘knew how to contain Liverpool and take advantage of their opportunities’, in a win masterminded by Ancelotti and helped in no small part by several Jordan Pickford saves.

Richarlison is described as repeatedly being on top of the struggling Ozan Kabak, which meant there was always the threat of another clean attack. 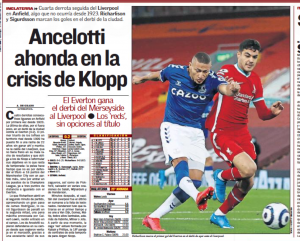 Sport report Liverpool are ‘drowning in their own troubles’ and Everton’s victory ‘broke Anfield’s aura’.

Marca go with a pun, using the headline ‘A ‘Pool’ of tears’, and they say the club’s situation is currently ‘disastrous’.

It’s a long way from all the praise handed out last season.