It’s no secret Claudio Bravo should be leaving Manchester City this summer, as his contract with the club expires at the end of the season.

Celtic have been linked, and that’s caused some interest in Chile.

Now the goalkeeper’s wife has just given a big hint that they’re preparing to move out of town very soon.

On Instagram, Carla Pardolizana has shared a picture of the Bravo family packing their things, with a message saying ‘the countdown has begun’.

Chilean outlet Al Aire Libre brings a story about it saying the player has a few options for the summer, including Scottish Premiership champions Celtic. 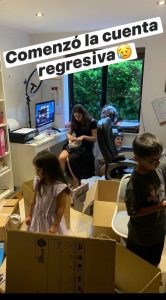 The outlet is clearly impressed with the Scottish side, pointing out that the club won the European Cup in the 60s, calling them a glorious club, and saying Celtic and have ‘one of the most beautiful fanbases in Europe’.

Claudio Bravo has been interviewed by the Chilean media this week and had a little to say about the rumours. Speaking to 24 Horas, he claimed he’s “looking for tranquillity, to be comfortable in one place”.

Should Glasgow be that place, then expect much more Celtic praise to come from Chile’s press.