Galatasaray are in the market for a goalkeeper following Fernando Muslerana picking up an injury, and Burnley’s Joe Hart reportedly remains a target for the Super Lig side.

Muslera suffered a serious foot injury earlier this month, and reports in the Turkish press say he will be out for around six to nine months. Subsequently Gala have started the operation to sign a new goalkeeper and Hart is said to be on their shortlist.

It’s reported the Burnley goalkeeper is a ‘consideration’ but his wage demands will be the decisive factor in any possible future transfer. Fanatik say Hart could be a good signing for the Turkish side, as he has yet to extend his contract with Burnley. 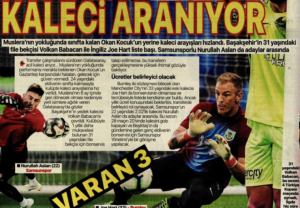 Along with Hart, Turkish goalkeepers Nurullah Aslan and Volkan Babacan are also in the frame, but Gala manager Fatih Terim hasn’t yet made any decision.

Hart has been linked with a move to Turkey repeatedly, after previous reports Besiktas and Genclerbirligi are interested.