Last Monday, we covered claims from Belgium that Club Brugge’s Marvelous Nakamba had decided not to turn for up for preseason training, amid interest from Aston Villa.

A day later, Het Belang van Limburg reported the Premier League new boys had offered €10m for the Zimbabwe international, but the Jupiler Pro League were demanding €12m to part ways with him.

Another Belgian newspaper, Het Nieuwsblad, now reports the 25-year-old has still not joined rest of his teammates for training, hoping to force a move away from the club.

It’s claimed that Nakamba’s transfer away from Brugge is ‘close’ and Aston Villa’s interest is once again mentioned.

According to player’s entourage, an agreement could be found soon between Dean Smith’s side and Brugge for the player. The latter are still demanding €12m to sanction Nakamba’s sale and the report doesn’tspecify if Villa are ready to meet the asking price. 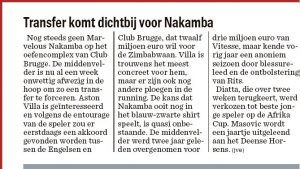 Nakamba, whose chances of playing for Brugge are close to non-existent, is attracting interest from others, but Aston Villa remain the ‘most concrete’ club for him.