While it never looked to be the case at first, Tiemoué Bakayoko’s potential transfer from Chelsea to Milan looks like it is gearing up to be one of the stories of the summer.

Very happy in Italy these days, the French midfielder recently reiterated his desire to stay with his current club beyond this season, which would cost his side €35m on top of the €5m they already paid.

And, according to Corriere dello Sport on Wednesday, Milan are doing what they can to get the player signed to a long-term contract, with help from the France international’s entourage.

The Italian newspaper state Bakayoko’s agents are in ‘constant contact’ with both Leonardo and Marina Granovskaia, but their hope of an easy path to a transfer is being squashed by a stubborn Chelsea. 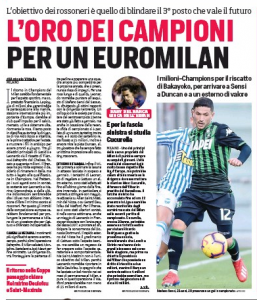 Corriere explain that, ‘according to the latest indiscretions’, the Blues are not interested in giving Milan any presents in negotiations, wanting the full €35m.

This makes sense considering their impending transfer ban, which they recently appealed.

They are currently third in Serie A, which would be enough, one point ahead of Inter and four in front of Roma.