It’s pretty clear now that we may see João Félix linked to Premier League clubs every day until the summer transfer window closes.

Today, it’s A Bola who does it, as they say Benfica are planning to keep the 19-year-old star in the squad for next season.

Club president Luis Felipe Vieira would be planning to do that by giving the player a pay rise and increasing his release clause from €120m to €200m.

A Bola doesn’t use their own reports to say who wants the player this time. They gather many clubs who have been linked to him, and lists Manchester United, Liverpool, Wolverhampton, Bayern Munich, PSG, Juventus, Real Madrid and Barcelona. 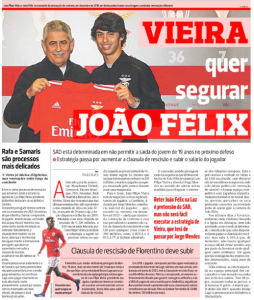 A Bola claims this renewal still isn’t guaranteed, since Vieira needs to speak to Félix’s entourage and see if they are interested in getting a new contract.

With so many clubs getting involved in this race, it’s impossible to tell who’s closer to getting Félix, even because A Bola says that none of them made ‘official’ contacts with Benfica for the youngster so far.

It’s also interesting how they refer to ‘even Wolves’, as if the Molineux side don’t have the stature to sign such a wanted player.

Nuno Espirito Santo’s side did manage to secure Ruben Neves, even when in the Championship, but it’s thought this would be a much bigger deal.