Earlier on in the season, Wesley Moraes’ name appeared here and there next to Premier League clubs, like Everton or Arsenal.

Certainly a like for like replacement for Cenk Tosun should the Turkish forward leave, the Club Brugge star is widely expected to leave in the summer for a fee of around €20m.

In their weekly magazine, Sport/Foot took a closer look at the 22-year-old, and speculate where he could end up next season based on previous links, with interest from Arsenal and Everton reiterated.

Lazio and Fiorentina have also been named, yet his impressive physique and ability in the air outside of the box make him an ideal target man for clubs in the Premier League, who often like to rely on that type of forward.

With this in mind, Arsenal might not be the best fit for him, but there are some who believe he can still improve in enough areas to fit a team like Unai Emery’s. 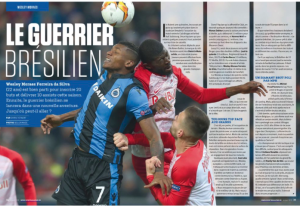 Former Belgium international Franky Van der Elst is one of them.

He said: “With his profile, he can always be useful to any team, but a player like him also needs specific training. His technique under pressure, one twos, decision making, his duels in the box… These are areas he needs to work on, because there’s less space in England.

“However, a strong and robust forward like him can find his place in many leagues.”

With Brugge unable to ask for endless amounts of money despite Wesley signing a new contract that keeps him at the club until 2023, €20m should be an affordable price for any interested side.

With Tosun struggling, he could be a better focal point for Marco Silva’s tactics.

As for Arsenal, he’d certainly be an interesting option for the likes of Pierre-Emerick Aubameyang and Alexandre Lacazette to play off.

So many options, and at that price, it might be worth the gamble.