Set to return to the north of France to play against Rennes in the Europa League, Mattéo Guendouzi will find himself in familiar territory eight months after leaving Lorient for the Emirates.

The Arsenal midfielder, who has instantly become a fan favourite at the London club, has surprised many by becoming a regular in his first season under Unai Emery, already racking up 36 appearances in all competitions.

With an important game just around the corner, Le Télégramme decided to have a chat with Jérémie Aliadière about the 19-year-old, who played with him at Lorient.

He said: “He’s impressing everyone, because, honestly, what he’s doing, it’s incredible. You have to see what he’s becoming. Everyone, even the club legends like Ian Wright, love him. Wright loves his style of playing, which suits the club, I think, but also his desire to always win”. 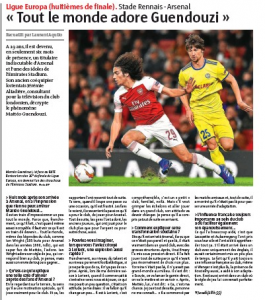 Singling out Guendouzi’s passion on the pitch as what fans immediately latched onto, Aliadière admits there was one thing he was worried about when they were together at Lorient ahead of a potential move to a  big club.

He said: “On a pure football level, no, I’m not surprised. However, when we started training together, his attitude made me question a few things. I thought he might need to change. At Lorient, he was in a small family club, but if he wanted to climb the ranks, it needed to change. I think he realised that”.

For the former Arsenal forward, Guendouzi seemed to understand straight away things weren’t the same at the Emirates, and feels the fact Emery played him straight away helped a lot.

As for what the future holds, only time will tell, but things are sure looking promising for the Arsenal starlet.