On Tuesday, Feyenoord chief Frank Arnesen confirmed this club have reached an agreement with Manchester United for Tyrell Malacia, and the deal will go through if the player says yes to joining them.

The Red Devils have been successful in overcoming Lyon in the chase for the left-back.

Algemeen Dagblad give an insight on how United got ahead of the Ligue 1 side in the race and how quickly the deal for the 22-year-old could be concluded.

Feyenoord want to sell one of their players before the end of the month to improve their finances. Lyon wanted to offer them €15m including bonuses for the fullback.

When Erik ten Hag’s side informed the Eredivisie club about their desire to take Malacia on Monday, the latter were delighted with it as United’s offer is €15m and could rise to €17m.

AD say Arnesen had to ‘restrain himself not to make a happy dance with his injured knee’.

With regards to the Netherlands international saying yes to United, AD state that ‘seems like a formality’ since it has been his dream to play in the Premier League. Due to this, he will have to withdraw the agreement he had in place with Lyon, either today or tomorrow.

Peter Bosz’s side are paying the price for not completing the deal quickly. Their chance to sign Malacia is thought to have ended when United reported their interest on Monday.

Ten Hag was impressed by Malacia’s performance for Feyenoord when they faced Ajax last season. Therefore, the manager made an internal effort for the defender’s arrival at Old Trafford. 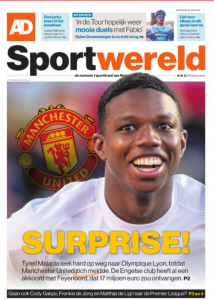 Malacia, who is currently on vacation, ‘will quickly join’ Manchester United.

AD state the ex-Ajax boss wanting his compatriot ‘so badly’ is an immediate signal to other left-backs at Carrington.

Meanwhile, De Telegraaf state the deal will be ‘completed quickly’ because Feyenoord want to include the sale in the 2021-22 financial year, which will end on June 30th. For this, it is important the player quickly reaches an agreement with United.

Malacia knew what he was going to earn at Lyon and De Telegraaf suggest he could now further improve his salary in England.