Home Europe Celtic to seal transfer ‘in next few hours’ – Announcement on the...
SHARE

Celtic are finally set to seal the signing of Jota from Benfica, report O Jogo.

The Glasgow club had Jota on loan from the Lisbon side last season, and as part of the temporary deal they agreed a purchase clause worth €7.5m. That was fortunate because given his performances since moving to Scottish football it’s likely he’d cost more had there not been a clause.

O Jogo report Celtic will use their option ‘in the next few hours’ and certainly before that clause runs out tomorrow. The 23-year-old and Celtic have now outlined the personal terms contract and that allows the deal to be completed.

Once again it’s stated Celtic are paying €7.5m for 70% of the player’s rights, which simply means Benfica will get 30% of a future transfer. It doesn’t mean they still own 30% of the player, that’s just the way these things are reported in Portugal. 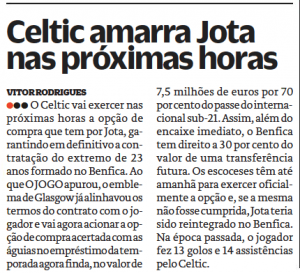 Once Celtic use the clause then Benfica will have to make a public announcement, as is their duty with the Portuguese stock-market.

Record report Jota will sign a four-year deal with Celtic, and the transfer ‘should be made official soon’.