On Wednesday, we relayed news from the Catalan media who claimed Manchester City and Paris Saint-Germain ‘would not hesitate’ to meet Ajax’s €75m asking price for Frenkie de Jong.

On the front page of today’s edition of Mundo Deportivo, it reads ‘De Jong yes Barca’ as he ‘prefers’ a move to the Camp Nou over joining the Ligue 1 winners and has already communicated the same to the Blaugrana.

Contacts for the Netherlands international were first initiated by former technical secretary Robert Fernandez and after consistent contacts, the 21-year-old has picked the Catalan club over PSG, Pep Guardiola’s side, Juventus and Bayern Munich.

Barca’s offer for personal terms for a five-year contract has already been agreed by the Dutchman.

The report, however, stresses the deal is not official because nothing is signed with the Eredivisie outfit, while the other suitors have still not given up on signing the player. 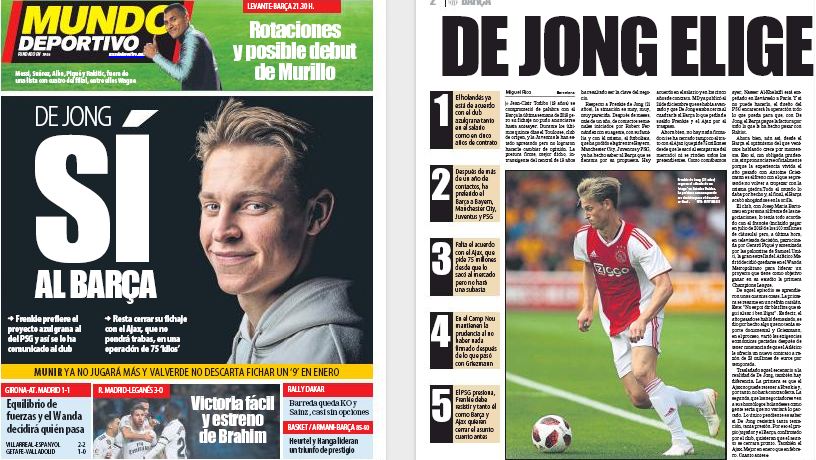 Nasser Al-khelaïfi wants to take the youngster to Parc des Princes and if he fails to do so, he wants to make sure the operation is expensive for the Spanish champions.

It’s clear that Ajax will have to sell their star in the summer and they cannot make a counter offer to retain him, like how Atletico Madrid did to keep Antoine Griezmann away from the clutches of Ernesto Valverde’s side.

Mundo mentions that Ajax leaders are ‘serious people’, who will not change their stance later, which is why there is optimism at the club about his arrival.

The only thing that is left is to know whether De Jong will be able to resist other offers in order to complete a move to Barcelona.

De Jong’s preference to join the La Liga winners may come as a blow for the likes of PSG and City, who have long been after him.