On Janaury 2nd, we covered a report from Mundo Deportivo, who claimed that Frenkie de Jong of Ajax is a priority target for Manchester City.

It was also mentioned the coming weeks will be decisive as the midfielder is expected to make a decision on his future, once he returns from the United States trip.

Journalist Oriol Domènech has provided an update on Catalunya Radio’s program ‘El Club de la Mitjanit’ on the Netherlands international’s situation and the key points are relayed in today’s edition of Sport.

The Premier League winners are joined by Barcelona and Paris Saint-Germain in the race to sign the 21-year-old and the Eredivisie outfit are demanding €75m to sanction the star’s sale at the end of the season.

It’s claimed Pep Guardiola’s side and the French champions ‘would not hesitate’ to meet Ajax’s asking price for De Jong. 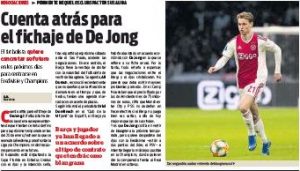 The Dutchman will make a decision on his future before January 20th, which is when his employer will play their first official match of this calendar year.

Barca are optimistic the player will decide to join them and should that happen, it will be a blow for City and PSG.