Thursday’s edition of Catalan newspaper Sport claims Adrien Rabiot’s decision to not sign a pre-contract agreement with Barcelona, and his agent subsequently meeting four other clubs, has caused tension for the La Liga winners.

It’s claimed that three of those clubs are from the Premier League and one of them is Tottenham Hotspur.

The midfielder is a free agent in the summer and has already made it clear to Paris Saint-Germain that he will not sign a new deal deal at Parc des Princes.

After the Frenchman’s decision to not extend the contract with the Ligue 1 winners, the 23-year-old wants to leave PSG in January order to avoid unpleasant situations.

Even though Barca are keen on acquiring Rabiot’s services, they will not be able to sign him in the winter market and this is when the north London club comes into the picture. 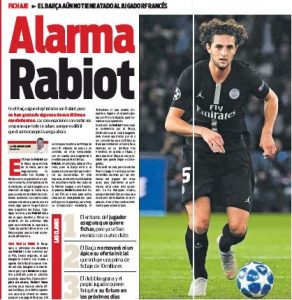 Mauricio Pochettino’s side are ‘willing to reach’ an agreement with PSG and the player in order to formalise the entire operation that will see Rabiot join Spurs in the ongoing transfer window.

Whether Rabiot will accept Tottenham’s proposal or not is to be seen.

It’s been repeatedly reported he doesn’t fancy the move, but also claimed in France that PSG would like to sell to a football ‘friend’ like Spurs.