Werder Bremen forward Milot Rashica has turned down an approach from Liverpool because he favours a move to RB Leipzig.

That’s what SportBild report today, covering the player’s future and the complicated deal that could take him to the German side.

Rashica is a wanted man this summer, having managed 11 goals and eight assists in 34 games in all competitions for Werder Bremen this season.

Their relegation from the German top-flight means he is likely to move on, and there’s a belief that he can be signed on the cheap.

That has alerted clubs around Europe, particularly in the Premier League with several, including champions Liverpool, all thought to be keen.

However, it seems his future will be in the Bundesliga as SportBild report that RB Leipzig have won the race for his signature.

They explain that ‘everything has been discussed’ with Rashica over a move and he is intent on signing for the club after an ‘intensive conversation’ with coach Julian Nagelsmann. 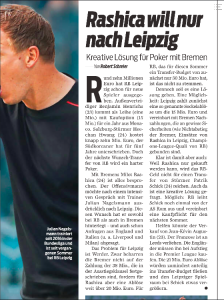 He has made this clear to RB and Bremen, in the process turning down ‘enquiries’ from Liverpool and AC Milan.

The problem is his current club. While they are not insisting that RB pay his release clause of €38m, they still want well over €20m for him.

Leipzig cannot afford this as their budget is only €30m, so they are trying to work out a solution that suits both clubs.

One idea is for them to pay a base fee of €15m and then pay add-ons based on various achievements during his time at the club, such as Champions League qualification.