Barcelona will need to bring in a new centre-back this summer as they can no longer rely on Samuel Umtiti, who has struggled with injuries over the last two years.

Last week, both Mundo Deportivo and Sport reported Barcelona’s interest in the 19-year-old, who left the Catalan club for the Citizens in 2017.

Journalist Miguel Rico, writing for the last page of Mundo Deportivo, claims Barca cannot afford to go into next season with Gerard Piqué, Clément Lenglet and Ronald Araújo as the three centre-backs.

Therefore, the Spanish side are looking at a handful of players and García’s name is included on the list.

Rico makes it clear that there is interest from Quique Setién’s to bring the teenager back to the club.

Barca have signed Miralem Pjanić from Juventus and before completing the deal, they first approached the player and then the Turin club. The Camp Nou side’s idea is to replicate the same strategy to sign the City centre-back.

According to Rico, the approach with City ‘won’t be easy’ because of Pep Guardiola, who wants to retain his compatriot and make him a starter next season. 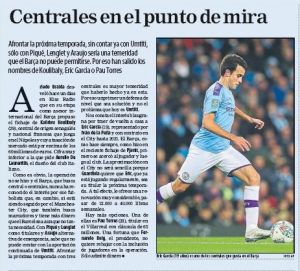 García has a year left on his contract at the Etihad and the Premier League side have already tabled a considerable renewal offer.