You may have seen a few days ago a story linking N’Golo Kanté to Inter.

The story came from Gazzetta dello Sport, and the idea was for the Chelsea star to swap Stamford Bridge for San Siro this summer and reunite with Antonio Conte now that he was ‘no longer unsellable’.

The Italian manager was at the London club when the Frenchman arrived, and their success together in that first season in London has certainly left its mark on both.

Wanting more experience in his team so he can win immediately, Conte would rather have Kanté at his disposal than someone like Sandro Tonali, who is just about to finish his first season in Serie A.

That’s why, to please their manager, Corriere dello Sport explain Inter have had a ‘new idea’, which is to try and sign the France international.

This has been ‘welcomed favourably’ by Conte, as he knows the midfielder will need little time to adapt to his demands, having already done so successfully in the past. 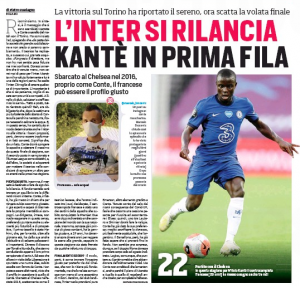 Corriere blast their article over two thirds of a page, claiming Kanté is now ‘in the front row’ of Inter’s plans, stating ‘he could be the right man’ for the club.

However, doing so would put an end to the pursuit of Arturo Vidal, much to Conte’s sadness.

Then again, who would you rather have in your team? Kanté or the Chilean?