Filip Krovinović was one of the players West Bromwich Albion signed in the last window as the 24-year-old arrived at The Hawthorns on loan from Benfica.

The midfielder has 21 appearances in all competitions for the Baggies and scored his first goal for the Championship side in their 1-1 draw against Barnsley on Boxing Day.

It was his first goal since January 2018 as a knee injury forced him to spend the majority of the last year on the sidelines. Even though the Croatian featured regularly for Slaven Bilić’s side, he’s made only 10 starts this season.

Speaking to Portuguese newspaper A Bola, the Croatian opened up about the injury scare he had earlier this season.

“When I arrived, I used to be a starter, but there was only one big blow to the knee [on the same leg that was operated] against Derby County,” Krovinović said.

“I was worried because the knee then swelled a lot. I had an MRI and was rested more because everything was fine, just a slight problem.

“I returned with some caution, and in the meantime, the team was playing well and winning, it was in a good phase. My concern, and everyone in the club, was not to push, not to exaggerate it. And I quickly realised that I’m 100 percent.”

Things have improved for Krovinović this campaign after having made only one start for Benfica last season. The player admitted he’s enjoying life at West Brom.

“I’m fine, I feel great at West Bromwich Albion. I like the club and the people. And the fans, the technical team, every agent treats me with great affection,” he explained.

“Only the weather in England is not very good, as you know, but I’m getting used to it. This is my first season after suffering the injury and everything has gone well, I’ve been playing and feeling great.

“Then the coach is Croatian [Bilic], there are two Croatian deputies, which is very good, we are good friends. It’s all great.”

When asked about his plans for 2020, he said: “To help West Bromwich Albion rise to the Premier League.”

A Bola reports Benfica allowed Krovinović to join the English side on a dry loan deal and West Brom don’t have an option to make his transfer permanent. 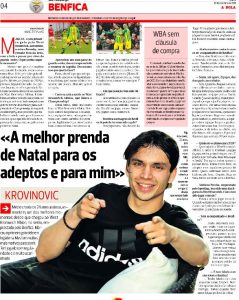 Krovinović’s contract with the Portuguese side runs down in 2022 and the player admitted he will have to return to his parent club after his loan spells with West Brom.

“For now, I’m just thinking about it [West Brom’s Premier League promotion]. I am very happy; the fans and the players like me. I want to go on like this. Everything is fine. Then, soon enough, I have a contract with Benfica,” he stressed.

Player ‘could land at Arsenal’, Gunners ‘love’ him – Club ‘prioritising’...

Leeds United transfer interest further backed up – Club yet to...