Tuesday’s edition of Sport has an update on Chelsea chasing Philippe Coutinho.

Within the report, it’s stated the Barcelona player’s future goes through the Premier League.

The Brazil international is an ‘object of desire’ for the Blues and with his signing, the west London club want to ‘relaunch a team’ that’s good enough to challenge for the title next season.

Coutinho is currently on loan at Bayern Munich and they have decided against making his transfer permanent. Therefore, the La Liga winners and Frank Lampard’s side have started negotiations for the former Liverpool man.

Chelsea are ready to bet on the 27-year-old because of his desire to return to the Premier League, his knowledge of the English league and his quality. Sport states these factors point towards the Stamford Bridge club signing Coutinho.

Barca are expected to face losses if they end up agreeing a fee anything less than €90m for the South American.

Chelsea, however, have no intention to reach these figures and in addition to this, they plan to play a ‘double trick’ over Barca in signing Coutinho. 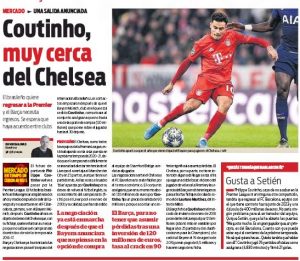 Lampard’s side are aware of Coutinho’s desire to return to England plus Barcelona’s need to raise money, not only to balance the books, but also to complete important signings.

Sport say agreement between the clubs is expected.