It was explained the Premier League winners are willing to offer João Cancelo as part of the deal to sign the Barcelona defender.

City’s local rivals Manchester United have also been looking at Semedo, according to Tuesday’s edition of Sport.

The Portugal international has gone ‘from untouchable to transferable’ at Camp Nou and many clubs have now taken an interest in him.

It’s claimed the Red Devils have ‘approached’ the Spanish champions to find out the right-back’s situation at the Catalan club.

If Quique Setién’s side were to receive a good offer for the 26-year-old, they will have ‘no problem’ in sending it to the fullback’s agent, Jorge Mendes.

The report also states the player is not ‘100% satisfied’ at Barca and wouldn’t have an issue in joining a club, where he can become ‘untouchable’ in their starting XI. 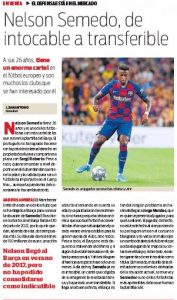 Semedo’s current deal with Barca is until 2022 and has a €100m release clause.

Sport states his asking price would be an ‘attractive figure considering his age and ability to grow’.

It’s to be noted Sport only states Ole Gunnar Solskjaer’s side have asked Barcelona about Semedo’s situation and it doesn’t necessarily mean they would make a move for him in the summer.

Right-back isn’t exactly an area of need for Manchester United.