Gala loaned the Romanian striker from Brighton last summer and he was an important member of Fatih Terim’s side before picking up a knee injury in November. The player spent almost four months on the sidelines before returning to action in late February.

Karar claim Galatasaray won’t be looking to extend his stay in Istanbul and that the Turkish club will look for alternatives to support Radamel Falcao.

Gala have been linked with a move for Aston Villa’s Mbwana Samatta in recent days, with claims they will move in on the Tanzanian if Villa don’t maintain their Premier League status for next season. 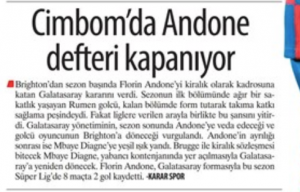 Karar report the return of Mbaye Diagne, who has been linked with a move to Nottingham Forest in recent days, is also on the agenda but it’s certain that Andone won’t be staying.

The Brighton owned player has made eight appearances in the Super Lig for Galatasaray this season, scoring two goals.

“He was certainly offered by Mendes” – Super agent approached Wolves with specific name, ‘have to see’ what outcome is

“He was certainly offered by Mendes” – Super agent approached Wolves...