West Bromwich Albion manager Slaven Bilic has given an interview to Turkish newspaper Fanatik and explained his thoughts about the Coronavirus outbreak and his life in the UK at the moment.

The Croatian manager still remains a popular figure in Turkey after his two-year spell at Besiktas between 2013 and 2015.

He was recently linked with a return to the Super Lig but it was reported he wanted to remain with West Brom.

Speaking about the current situation, Bilic said people need to stay disciplined and listen to the advice that healthcare professionals are giving to them: “Obviously, you couldn’t imagine this kind of thing will happen. But here we are. We’ve been told to stop doing our jobs. Of course, it’s impacting my life in a very bad way, but I remain grateful.

“We are lucky. There are people in the world that don’t have enough money and are currently in a bad situation. A lot of people facing danger to lose their jobs. If I complain at the moment, that’d be crazy.

“There are people working in the hospitals and they are risking their life for us. Some people need to stay alive in very small flats. So, comparing to them, my situation means absolutely nothing. We should think about how we can help those people and we need lots of things to help them both financially and morally.”

His West Brom side were sitting six points ahead of 3rd placed Fulham before the Championship stopped due to the virus, and Bilic believes the season needs to be completed on the pitch: “I don’t know when football will restart. The professionals will decide that, but the important thing is the safety of the people.

“Actually, I don’t think about football at the moment. I hope football will resume soon both in England and Turkey. Because I think this season needs to be completed on the pitch.”

The Croatian said he’s currently in Birmingham with his family and he’s following his players’ situation on the internet: “I’m with my family in Birmingham. We are trying to comply with the rules. I’m only leaving the house for 15 minutes to get some food. We gave our players some training regime to follow during this situation. 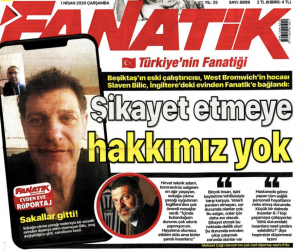 “We are following their progress on the internet. But it’s not a hard training programme. I think we will have a lot of time in training once this is over.”

West Brom face an anxious wait to see if the season with be competed and will be fearing it will be voided. Along with Leeds United the Baggies looked on course to get promotion to the Premier League via the two automatic places.