Genk midfielder Sander Berge has insisted his head is in the right place, despite the consistent rumours surrounding a move to Liverpool.

The Norway midfielder is one of the most highly-rated players in Belgium, having impressed with Genk since joining them in 2017.

He has reportedly attracted plenty of interest from the Premier League, with Tottenham, Arsenal and Liverpool all linked with potential moves this year alone.

Of those three, Liverpool are thought to be very keen with recent reports saying they ‘follow him closely’ and that they may even make their move in the January transfer window.

There have been suggestions that such rumours have affected the young midfielder’s performances, with he and Genk struggling for their best form this year.

He, though, insists that isn’t the case, and his head is in the right place, and there has never been anything to the rumours despite ‘flirts’.

“I can assure you that this is not the case with me,” he told Het Laatste Nieuws when they questioned if he has been distracted.

“Winter or summer, every transfer period there is a lot of speculation about my future. But at the moment, there’s nothing concrete, and that’s just the truth.

“Playing Champions League with Racing Genk was a dream come true for me, but it’s not because that adventure is over that I absolutely want to leave now. 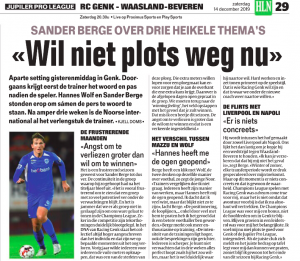 “If the right club comes forward and puts the right amount on the table for me then we can talk.

“Otherwise I’ll just stay with Racing Genk until the end of this season.”