Leicester City midfielder Youri Tielemans has revealed he had intended to return to Monaco this summer before the Foxes convinced him otherwise.

The Belgian midfielder joined Leicester on loan in January last season and impressed during his time there, with three goals and five assists in 13 games.

That form pushed Leicester to make the move a permanent one this summer, with them paying £40.5m to sign him from Monaco.

That fee was seen by most as something of a steal, with plenty surprised they had managed to sign the highly-rated midfielder ahead of bigger teams and Phil Neville even describing it as ‘almost theft’.

Tielemans admits it’s nice to hear such things and revealed it was the Leicester ‘project’ that made him make the move.

“When an ex-footballer says something like that about you, it’s good. He knows what he’s talking about,” he told Het Laatste Nieuws.

“The transfer fee itself is not important to me. I knew that Leicester wanted to keep me very much. The coach and the club had made that clear to me.

“Just like they emphasised that Leicester wanted to mix with the big teams again. That it hoped to force European football again.

“The initial plan was that I would go back to Monaco after that loan, but because things went so well here, I stayed. The project appealed to me.

“So if it hadn’t been for this amount, I would have come to Leicester for another sum.”

This season Tielemans has picked up where he left off, playing a pivotal role in Leicester’s impressive campaign so far.

The Foxes currently sit second in the Premier League and are the primary challengers to Liverpool for the title.

Tielemans has been instrumental in that, with five goals and five assists in 19 games in all competitions putting him among the top performers in England.

Much of the credit for their resurgence has been given to manager Brendan Rodgers, but Tielemans insists it’s a mix of things.

“It’s all kinds of things. We have a very good coach, experienced players and young players who are hungry to learn and get better,” he added. 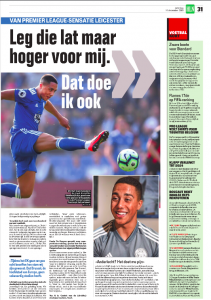 “It’s the perfect mix in a family environment. Leicester also has that image to the outside world, but it’s only when you play here that you feel how hard this club is connected.

“That unfortunate, tragic event (refers to the helicopter crash in which the Thai owner Srivaddhanaprabha was killed, ed.) has brought us even closer together.”