Inter Milan are in the market looking for a new left-back in January and Chelsea’s Marcos Alonso has been identified as a target.

Earlier this week, FcInterNews first reported the Spaniard’s asking price would be €25m, while Gazzetta dello Sport then explained it to be around €35m.

On Friday, Corriere dello Sport stated the defender’s valuation is ‘not inferior to €30m’. However, Inter’s idea is to take him on a loan deal for €2-3m with a view to making the transfer permanent for €20m.

Saturday’s edition of Corriere claims Antonio Conte is a big fan of the former Fiorentina man because he has already coached him and the player knows the Italian league very well.

However, a ‘Chelsea wall’ is preventing the San Siro club from signing the 28-year-old, who is not used by Frank Lampard due to technical reasons.

The newspaper claims Chelsea owner Roman Abramovich is demanding €30-35m to let the fullback leave in January. ‘A mountain of money’ for a player who is not a key member for the Blues. 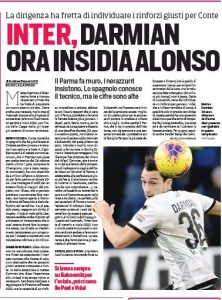 It’s claimed the Europa League winners are unwilling to find any sort of formula with Inter for Alonso.

That includes a dry loan deal or a loan deal with right to redemption, and both of these deals included Inter paying the Spaniard’s wages.

Despite this, Corriere reports the Alonso idea shouldn’t be discarded, but the latest development has forced them to look elsewhere.

Parma’s Matteo Darmian is viewed as an alternative.