Before arriving at Watford in 2016, Roberto Pereyra spent five seasons in Serie A.

It was Udinese who first brought him to Europe from River Plate in 2011. After representing them for three seasons, he joined Juventus initially on loan in 2014 before the deal was made permanent a year later.

The Argentina international featured regularly for the Turin club in his debut season. However, he struggled with injuries in his second season, which is why the Old Lady decided to make him available on the market.

Despite enduring two contrasting seasons at Juventus, the 28-year-old told Gazzetta dello Sport he doesn’t regret having joined the the Serie A winners.

When asked what didn’t work for him at Juve, the player said: “Nothing. The first year I played a lot despite the big names in midfield, Vidal, Pogba, Marchisio, Pirlo.

“In the second, I had many injuries. I was out 4 months and the club chose not to bet on me anymore. But I have no regrets, they were two very rich seasons.”

This allowed the Hornets to secure the South American’s services and he believes the Premier League suits him.

Regarding the type of football in England, Pereyra said: “[It’s] less tactical and more physical, with so much intensity. It’s suitable for my characteristics, because I am one who runs a lot. 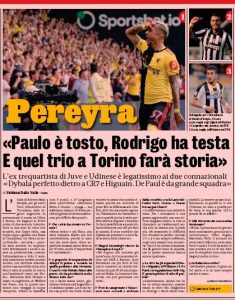 “Above all I play midfield, but I did a bit of everything, even as a playmaker and as a striker.”

Despite making those comments, the Watford player says he’d be positive about a return to Serie A.

“I would like to. You play good football and I have always felt at home,” Pereyra stressed.

Pereyra’s contract at Vicarage Road runs down in 2021.