But there’s one problem, and it’s rather big. Nobody consulted Gerard Deulofeu or the player’s agent.

Deulofeu has been keeping his options open. He doesn’t want to agree to Barcelona taking him from Everton, only to then spend next season glued to the bench and ultimately missing out on the World Cup.

Barcelona had been waiting for an answer from Deulofeu or his agent, but since they hadn’t received one, it was decided to take the situation into their own hands and contact Everton.

It means that Everton can’t now negotiate with other clubs, and sell Deulofeu elsewhere. However, Barcelona will still need Deulofeu to agree to a Camp Nou return, and to do so before June 30th. 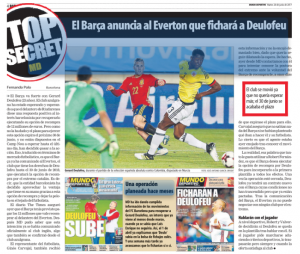 This is all about putting the ball in Deulofeu’s court, and making it clearly his decision.

Catalan newspaper Mundo Deportivo report that Ginés Carvajal, Deulofeu’s agent, was angry on Monday when he found out about the situation. The player and his agent had wanted more time to consider their options.

They still have that time, for the next ten days, but Barcelona have now made it very clear what their stance is, Everton will just have to wait and see what happens.