Kyle Walker gets a mention on the front page of Tuesday’s Sport. The Catalan newspaper reveal more inside, and it’s not that the Tottenham player is a big Barcelona target, it’s just that he’s on holiday in the city.

Sport say that Walker has been spending time ‘relatively close’ to the Camp Nou, and it’s all too much of a coincidence for them to ignore.

Walker is a right back. Barcelona need a right back. Sport believe Walker’s contract is relatively short at Tottenham (they think it ends in 2019, they’re wrong). Barcelona might be able to get a good deal. The player has been linked with a transfer anyway.

It all fits together.

So Sport got on the telephone to Barcelona and spoke to the club’s technical chief, and transfer guru, Robert Fernandez. He believes Walker is a great player, and the Tottenham 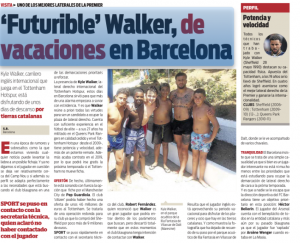 star fits what Barcelona would be looking for, so… there’s nothing in it.

Barcelona currently have no plans to contact Walker, whether he’s in the city or not.

If the England international is playing some sort of elaborate hinting game then perhaps he needs to up his game, maybe a Camp Nou tour would do it.