The Pau Lopez to Tottenham Hotspur situation could drag on until the end of the summer transfer window, with Daniel Levy trying to wear Espanyol down.

At one point it looked like it could work, and Espanyol may cave in and sell Pau for just a couple of million Euros, with the player’s contract expiring next summer, but things have changed over the past few days.

The Catalan press have been reporting how Espanyol are now determined to turn down that €2m, because it would only really bring an extra €1.5m from Tottenham. With Spurs forced to pay a €500k ‘fine’ if they don’t use the €7m buying option, Espanyol are taking that into account when assessing offers.

Espanyol’s CEO was asked on Monday about Pau and his Tottenham transfer situation, Ramon Robert was very clear, and said: “There’s an option (for Tottenham) to buy until June 30th and if they do not pay it, he will be a Espanyol player. If he wants to finish his career here, we will all be very happy to have him.”

If Espanyol keep Pau, and therefore get their €500k payment from Tottenham, and get the goalkeeper to renew, it could work out well for them. Despite having signed Diego 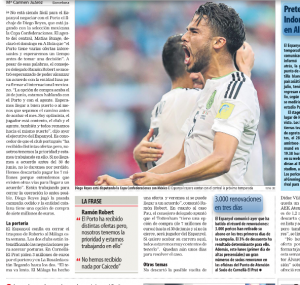 Lopez as first choice, Pau on a new contract would instantly be worth much more than the €2m Tottenham are offering.

Meanwhile, Tottenham will have been left paying a €600k loan fee, the €500k fine, and Pau’s wages for a season… for nothing.

Espanyol are trying to take back control, and they’re not doing a bad job of it.